Welcome to The University Of Sheffield Tennis Club

We’re one of the most welcoming sports clubs around and our memberships represent fantastic value for money. We offer tennis for all abilities, from complete beginners right through to players that meet our team standard. There are lots of ways to get involved and play tennis with us, from match play, group coaching and fitness sessions for our team members, to social tennis, coach-led sessions, box leagues and club tournaments for our social members.

Aside from tennis, one of the main benefits of joining the University of Sheffield Tennis Club is the events and socials we run throughout the year. We’re an extremely friendly club and joining us is one of the best ways to have fun and meet new friends outside your own year group and course. Our socials are really popular and we’re always happy to have new members come along.

If you’re thinking of joining us please come and try one of our sessions. New members are welcome to join us at any point during the year and your first session is absolutely free. If you have any questions please get in touch, we’d love to hear from you and hope to see you on court very soon!

You can buy membership through the Sport Sheffield website. Once you’ve paid membership, please request to join our private members group on Facebook (UoS Tennis Club Members). Once we have received notification of payment we will approve your request. If you’d like to join but you’re worried about affording our membership please contact us, or our inclusion officer, in complete confidence, because we’ll do everything we can to help. The University offers a Participation Grant which provides up to £200 to help students take part in sports and activities. For more information and to check your eligibility visit https://www.sheffield.ac.uk/ssid/finance/participationgrant. 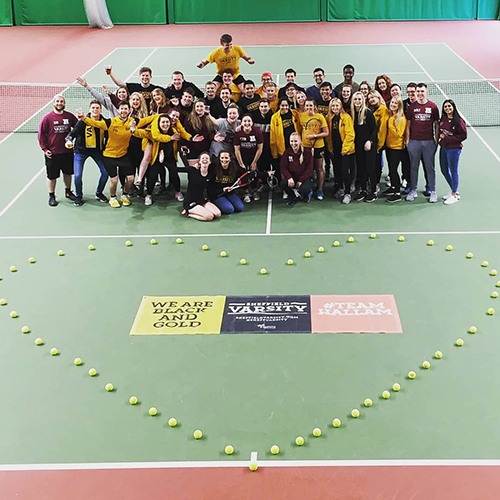 Team Tennis Who: Team members What: Training, matchplay and group fitness When: Monday 8-10pm: Women's team training Tuesday 8-10pm: Men's team training Wednesday afternoon: Matchplay Friday 7-9pm: Mixed team training Where: Graves Health and Sports Centre, Bochum Parkway, Sheffield, S8 8JR The University of Sheffield Tennis Club has 2 men’s teams and 2 women’s teams (8 players per team) who represent the university and compete in the Northern BUCS leagues. Team members must qualify at trials which are at the start of the year. Team training takes place twice a week, with the women's teams training on Monday, and the men's teams training on Tuesday, as well as our mixed training sessions every Friday. We have a Level 4 coach for our Monday and Tuesday sessions. Matches are played on Wednesday’s against other universities in the Northern BUCS leagues. All team training sessions and home matches are played at Graves Health and Sports Centre on indoor courts. All transport costs (or petrol contribution if you have your own vehicle) to and from training sessions and matches are included in the membership price. Many of our team members also get to compete in Varsity each year, the annual sporting event in which The University of Sheffield goes up against Sheffield Hallam University. Varsity is a hugely popular university-wide event that involves all of our members each year, whether they’re out playing or supporting from the sidelines. Social tennis Who: Social (non-team) members What: Weekly organised games session When: Wednesday 2-4pm Where: Rustlings Lawn Tennis Club, 43A Collegiate Crescent, Broomhall, Sheffield S10 2BR Social tennis is our most popular session of the week for social (non-team) members. There are five all-weather courts which are split by ability into beginner, intermediate and advanced. You can choose which courts you want to play on and are free to move around. The session is led by our team of social secs, who are committee members and students at the university. Members can use the clubhouse, changing and toilet facilities. We can provide tennis rackets if required. Intramural box leagues Who: All members What: Organised internal box leagues When: Play anytime, or on Sunday’s when we have courts booked We coordinate box leagues for all our members to participate in. Players are grouped together with other players of a similar ability and are encouraged to play regularly within their groups. There is an additional £5 fee to take part in our box leagues to contribute towards the extra cost of court hire. Box league matches can be played at any time throughout the week and on any tennis courts across Sheffield. We hire tennis courts every Sunday afternoon at Rustlings Lawn Tennis Club which are exclusively available for box-league players to use. In 2019/20 we ran both singles and doubles box leagues and over 70 members took part.

Commitment to Inclusions' award winners at the 2017 & 2018 Sports Awards

Won all 3 Varsity points at Varsity 2018 without dropping one rubber- a first for the Club!

Highest membership numbers ever recorded for the club in 2018/19